We are back from our "vacation." We followed Daddy and Grandpa around northwest Ohio as they completed GOBA (Great Ohio Bicycle Adventure). This event began in Norwalk, Ohio. We spent our first night actually staying in Milan, Ohio (a suburb of Norwalk). We went swimming at our first hotel and enjoyed a meal at an old homestead. The next day the tour headed to Elmore, Ohio. Elmore was an adorable small town and they were ready for all of the GOBA riders. They had lots of cute little shops and we ate lunch at the Red, White, and Brew Cafe. Our next hotel was in Perrysburg, Ohio. We actually stayed there for three nights! Our first night we went to dinner at Tony Packo's. Apparently Tony Packo's is a well-known Toldeo hotspot that was made famous on "MASH." It's hungarian and we all had different versions of "fill-in-the-blank" paprikas. It was ok, but I didn't think it was the best meal of the week.

The next day was Monday and the boys took a break from cycling to join the ladies at the Toledo Zoo. We called ahead on Sunday afternoon and ordered ourselves a picnic lunch. This was something that was touted on the Toledo Zoo website and I thought it sounded like a fun and easy idea. The zoo was VERY busy on Monday because it is free to Lucas County residents on Mondays, but we still enjoyed ourselves. Adam had never seen a polar bear and he really enjoyed getting to see two of them! Sadie enjoyed seeing the turtles because she was easily able to track them in their tank. She also managed to fall asleep in the stroller. This worked out very well because she slept through lunch. We ate our lunch in an area that overlooks the "African Savanna." This was awesome because we got to basically dine with giraffes, zebras, wildebeasts, and African deer. After lunch Sadie woke up and we rode on the carousel. We also bought Sadie a mini-zoo-keepers outfit, a matching hat, a frog for the water, and a puzzle. (Yes, I know she is spoiled!). Here are some pictures from the zoo: 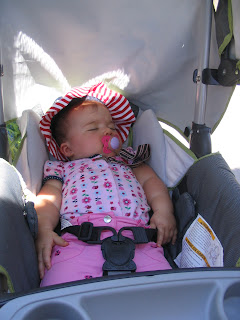 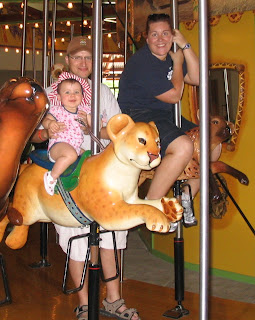 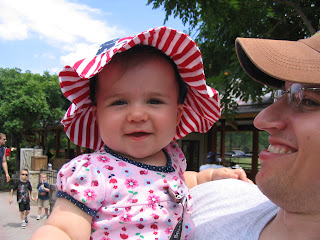 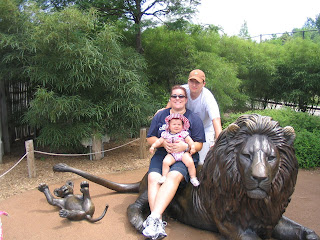 On Monday night we went into downtown Perrysburg and ate at Zengo's. This was a WONDERFUL Mediterranean restaurant. It was by far the best meal of the week and we had enough food for probably 50 people! We had probably the best couscous that I have ever had. The whole meal was just wonderful. After dinner we walked around Perrysburg and discovered a number of cute kids stores.

On Tuesday the boys headed towards Bowling Green. The ladies went back to downtown Perrysburg to do some shopping. We found an adorable outfit for Sadie and looked at some pretty darn cute shoes. We also had a great lunch at another local stop. Then we picked up the boys, headed back to the hotel so they could shower, and then went to an outdoor shopping mall. We bought Sadie a pair of adorable tennis shoes for the fall. Then we headed to another kids toy store that we had read about. It ended up being a bit of a disappointment, but we did buy Sadie another puzzle. After the toy store we went to dinner at Gino's Pizza. This had sounded great but was again a bit of a disappointment. After dinner we decided to head to Maumee Bay State Park. This was recommended by a zoo worker. We had high hopes but things were again disappointing. For one, Sadie became horribly upset in the car on the way there. I've never seen her that upset! It was awful. When we arrived at the park, we did see a weasel chasing a bunny. That was certainly unusual. When we actually got to the beach we were disgusted to find that - due to budget cuts - the park no longer had any trash cans. Any trash that came in to the park was supposed to be taken out by those who brought it. Not surprisingly, people weren't doing this. That meant that there were dirty diapers pile along the sink in the bathroom and there was lots of other trash scattered on the beach. Gross! But, we did let Sadie get her feet wet. Here are some pictures of that: 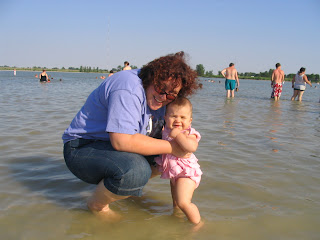 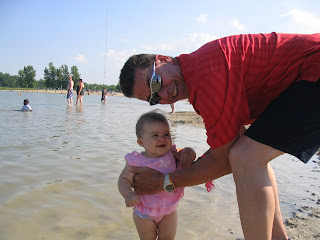 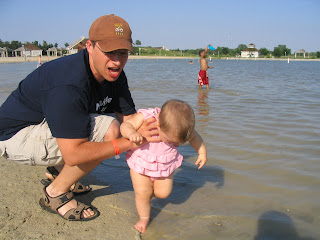 The next day, Wednesday, the boys were off to Defiance. The ladies made a lunch/shopping stop in Grand Rapids, Ohio. This was another quaint small town. We had a good lunch. Sadie enjoyed herself. Check out this picture: 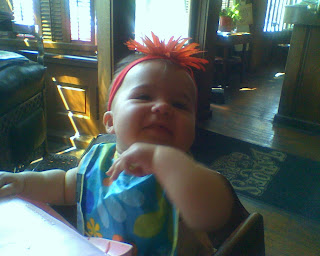 Our hotel for that evening was in Napoleon, Ohio. They had a GREAT pool! We enjoyed swimming and then headed to the local Mexican restaurant. It was actually very good and we enjoyed ourselves.

The next the boys took another break and joined the ladies in heading to Sauder Village. This is a historical village. We had a great time and enjoyed more shopping! We bought Sadie a "vegetables" collection. She had really been enjoying playing with the vegetables in Little Pioneer Village, so Daddy went and bought her some of her own vegetables. She loves them and is currently playing with them on the floor as I type this! We had a good lunch at "The Barn", the local Sauder Village restaurant. For dinner we ate at the old local pub in Napoleon.

The next day the boys headed to Fostoria, Ohio. This is a town that had seen better times. Still, we managed to get a few great pictures of Sadie. Here they are: 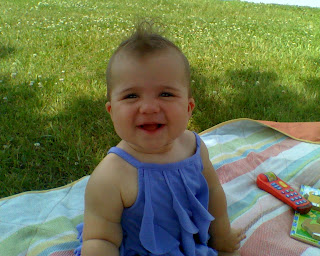 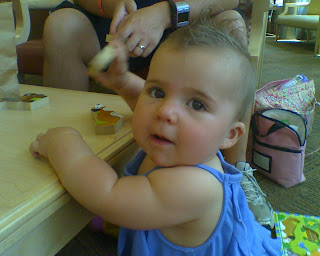 The first picture was taken while we were waiting for Grandpa and Dad to finish their ride. It was right before we got a phone call that Grandpa had crashed his bike. He has lots of road rash and hurt his thumb. He also pretty much totaled his bike. But, he has survived and still wants to do GOBA again next year. The second picture was taken at the hospital while we waited for Grandpa's hand to be x-rayed. Sadie was VERY patient. We spent that night in Findlay, Ohio and ended up just heading home the next morning. Adam decided to not ride the last day.

On Saturday when we got home we went to the Worthington outdoor pool for a swim. Sadie had a great time. On Sunday we drove to Uniopolis, Ohio for a family reunion. This was a reunion for my Dad's side of the family. Sadie really didn't enjoy spending even more time in the car, but she was a hit with the family.

Well, Sadie's ready for some yogurt, so I've got to run! Hope all is going well for all of you out there!
Posted by Krysten at 8:45 AM

Oh my gosh, she is getting so big! Can you believe this time last year, we were visiting you and you were still pregnant? Where does the time go?

Looks like you guys had a fun time on your trip! :)

What a little cutie! Looks like she had a great time! Maybe she inherited her Mommy's traveling genes.