Finally, when Sadie reached the ripe old age of 10 months and 5 days, she had two small teeth begin poking through on her bottom gums. Everyone tells me that the longer you can go without having teeth, the easier it is for the child. I'm not sure that I would agree. Sadie "just happened" to get a cold at the same time that these teeth came in. We went several days with very little sleep in our nights. The nights involved LOTS of rocking and singing. Then Sadie kindly passed her cold on to Mommy, Daddy, and Grandma. But, it all ended up being ok. I don't have a good picture of these teeth yet because Sadie typically likes to put her tongue over top of them. Maybe by next month she'll be willing to show them off!

Just as those teeth were poking through, Aunt Rhian came to visit. I can't actually find any pictures of this to post. :( But, Sadie did enjoy visiting with her aunt. She was a little afraid of James, but she had warmed up to him a little by the end of their visit.

Then came my birthday! Happy 29th Birthday to me! Adam, Sadie, and I drove to Indianapolis. We had pizza at the BEST pizza place in the world - Bazbeaux. It was fantastic, as always. Then we went to check in at our hotel, an Extended Stay. After checking in and getting things settled, we headed over to Al and Suellen's to see them and Parker. Parker was sleeping when we arrived, but Sadie got right to work on playing with her toys. Parker didn't sleep for long, though, and was most interested in watching Sadie play. Sadie then got very fussy - she was tired - but pretty much refused to sleep. We decided to go for a walk to the park. That ended up being a great choice because Sadie did eventually fall asleep in the stroller. But, not before we got a picture! Daddy and Al are pushing and Sadie and Parker are swinging.

After the park and Sadie's brief nap, we headed out to dinner at a Mexican Restaurant. Amy, Ben, Bryn, Shay, Al, Suellen, Parker, Sadie, Adam, and I had an enjoyable birthday dinner full of chips, salsa, guacamole, and Mexican goodness. We then decided to plan our trip to the Children's Museum the next day.

On Wednesday we went to the Children's Museum. While we had a very enjoyable time, we were also a bit disappointed. The Playscape area, the area designed for little kids, was a bit too little and a bit too crowded. We still managed to have a good time, though, and here are the pictures to prove it:


Isn't the picture of Sadie and Sam hysterical!!! Sam is the son of my friend Cathy. He was born in February. Sadie found him adorable, except when Mommy was holding him and she became rather jealous, but he is a pretty darn cute little guy! The last picture is of all of the children at the museum. Left to Right we've got: Chris, Bryn, Shay, Sam, Parker, Hailey, Sadie, and Hannah. What an adorable group!!!

On Wednesday night we all went over to Amy and Ben's. There Sadie and Shay enjoyed playing together in the kitchen. Here are the shots of that:

On Thursday we went to the Indianapolis Zoo. Sadie had a great time there! She got to see some sharks up close and then got to help Daddy feed a giraffe. We also got a great shot of Sadie and Parker.


After the zoo we headed back home. We were only here briefly, though, and then we headed up to see Great Grandma, and Grandma and Grandpa Brinkley. It was Great Grandma's 85th Birthday. Sadly, the only picture we got of the whole affair was of a picture of Great Grandma's cake. 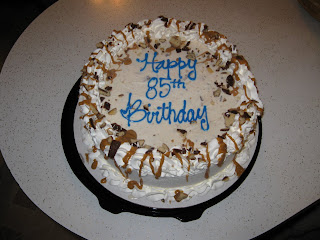 We had a great time celebrating with Great Grandma. We got to visit with Uncle Tim, Aunt Sarah, and Codey and Noah. We also got to see Adam's cousin Stephanie and her son Justin. We had a good time hanging out with everyone.

The next day we woke up in Louisville and headed into Canton for breakfast. At breakfast, Sadie impressed an older gentleman with her incredible cuteness and he gave her a dollar! How awesome! Not even a year old and already bringing in the money! After breakfast we decided to head to Metzger Park and do some geocaching. This is one of Adam's new favorite activities. We use the GPS watch I got him for his bike and go traipsing through the wild looking for little plastic boxes. It's actually a lot of fun and we ended up picking up a Sesame Street washcloth for Sadie as a "prize" from one of the buckets.

Well, that certainly brings things more up-to-date! I'm not happy to report that I'll be heading back to work in just a few weeks. But, then Grandma gets to begin her full-time Grandma duties and she's very much looking forward to that. Sadie is waking up from her nap right now, so got to run!
Posted by Krysten at 3:12 PM

It was sooo good to see you! Love the pictures of all the cuteness and fun.

Hermes Handbags package can be seen from the shape can be installed very, plenty of room, coat, cosmetics, nursing pillow with a flight, carry things can be loaded into, very convenient and practical.Louis Vuitton handbags with great boldness of vision of the changing aesthetics and eclectic fashion show famous.Things could be worse: a sunny summer day, a speedy convertible and a cool IWC Replica. The watch is also an AMG, of sorts: the Ingenieur Automatic AMG Black Series Ceramic, introduced in 2013 in honor of Rolex watches Replica’s sponsorship of the Mercedes AMG Petronas Formula 1 team.We spend the morning shooting photos of the Breitling Watches Replica?in and around the parked roadster, so we have time to scrutinize all the Omega Watches Replica ’s details.