Ok, so I can tell it's been way too long since I've posted when I went to upload the contents of the camera today and realized that I still had Easter Pictures on there that had not been uploaded! I also had pictures from our zoo trip over Spring Break and many, many more pictures of our other adventures in the last month.

First, Sadie's 8 month stats: I'm not sure about her length, but I'm certain she's grown! Her pants keep getting shorter and shorter! Her weight finally seems to have hit a plateau. She weighs in anywhere from 21 to almost 23 lbs depending on the time of day and whether or not she's recently eaten or had a diaper change. She is easily wearing 12 months clothes and often wears 12-18 month or just plain 18 month clothes! She's a beast, but she's sure an adorable beast!

Ok, I figure that we should do this chronologically. Here are two zoo pictures. These were taken way back at the beginning of April. Sadie has her adorable hat on that she got courtesy of Grandma and Grandpa Brinkley. 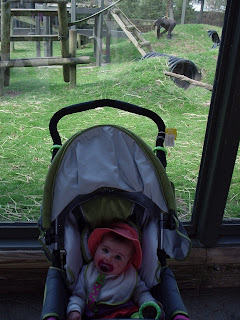 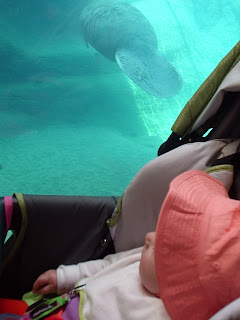 Sadie did enjoy the gorillas, one of Mommy's favorites, but she REALLY liked the manatees, Aunt Rhian's favorite animal!

Next up is a shot of the family with the Easter bunny and his wife. This was courtesy of one of Adam's former co-workers who now owns Schmidt's Fudge Haus in German Village. 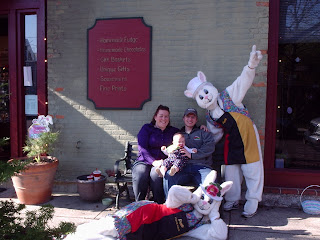 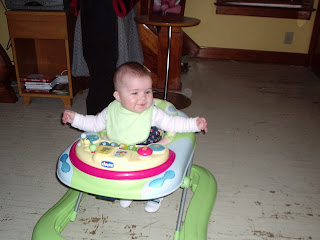 This next photo is actually a scanned picture. But, it is a MUST share! The advantage of living in a BIG college town is that they are always looking for people to participate in research studies. This is why we received a letter in the mail at the end of April asking if we would be willing to have Sadie participate in a study. All she had to do was go to the Cognitive Development Lab (in the OSU stadium!) and look at some pictures and listen to some sounds. Since I was all too eager to have my wonderful child display her amazing intelligence, I signed her up immediately. Sadie did a GREAT job and when we were all finished she received (sorry it's sideways, can't figure out how to fix it!): 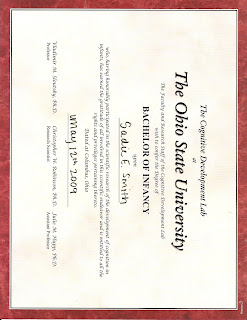 We are now FINALLY getting to our recent events! Last Sunday, one week ago today, Sadie was baptized. This was a very special day, so she got to wear a very special dress and she had lots of special visitors to witness her baptism! Aunt Rhian flew in from Arizona, Grandma and Grandpa Brinkley came down from Louisville, Uncle Kevin came, Grandma and Grandpa Stotts came, and, of course, Mommy and Daddy were there too. This day was beautiful and Sadie did a marvelous job, even though she usually naps during the time of the service! She was a trooper! Another thing that made the even special was that Sadie actually had water that was from the River Jordan in her baptismal water. When I was a teenager, my family travelled to Israel. I bought a small plastic bottle, filled it up with water at the River Jordan, and brought it home. I had thought that I would someday use it to baptize my child, but back then (I think I was 15 or 16), it sure seemed like a LONG way off. I'd sure like to go back in time and thank myself, though, because I really don't think you'd be able to get that water through security anymore, so that makes the water even more special. Anyways, here are some pictures of the big day: 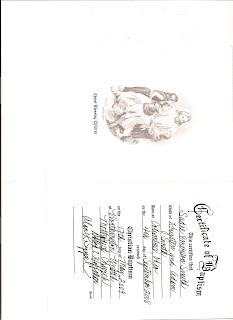 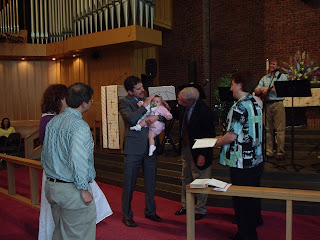 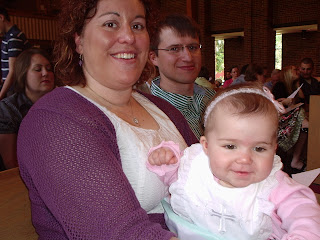 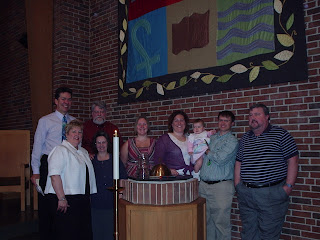 Finally, our very exciting news! Last Friday night (May 15) Sadie pushed herself to a seated position for the first time. She's been easily sitting up for nearly 2 months now, but on that night (and every day and night since) she's been pushing herself from her tummy to a seated position. She will also get up on her hands and knees, but when it comes to actually crawling, she still prefers the butt scoot or to move her arms and one leg and drag the other leg behind her. One of these days I know she'll get all the steps put together, but she is getting where she wants by simply scooting how she can, so I guess it will do for now!

Also, last Saturday morning Sadie said her first word..."Dada." Now, goodness knows that I love the child, but in the week since, there hasn't even been a sort of utterance of "Mama!" And, to make it worse, it you say to her, "Sadie, say "Mama!" She smiles up at you with an obnoxious grin and says "Dada" even louder! What a little stinker! And, don't think I'll let her forget that she said Dada first when she comes crawling to me as a teenager and wants something! No, no, go ask your father, you had his name down first!!! :)

Well, Daddy wants me to come out and start some planting while he's mowing the grass, so I've got to run! Enjoy and I hope everyone is doing well!
Posted by Krysten at 1:39 PM

Too funny, we just had Sam's baptism today, but the pictures are to follow. Congratulations! You know, Chris weighs 25 pounds, and is in 18-24 month clothes...and he's 3. So between my dainty boy and your "beast" they should be the same weight by the next time we see you.

Great pictures! Sadie is too adorable!