Last Tuesday Adam took Sadie to the doctor for her 4 month check-up. She was weighed and weighed in at 17 lbs even. This puts her just above the 95th percentile for weight. She was measured for height and is 25.5 inches. That puts her between the 90th and 95th percentiles. Her head size was also measured and she is between the 75th and 90th percentile for head size. Adam also got to experience the unpleasantness of having the baby get her shots. She had an oral vaccine and then two shots in the right leg and one in the left. The shots didn't seem to have too much of an effect on her at first, but that was made up later when she didn't go to sleep until after 11 on Thursday night and was then up every hour until 5 am. Thankfully, Mommy did not have school on Friday due to the unusually cold temperatures! It was well below zero with the wind chill!

On Friday night, Adam and I decided to try setting Sadie down to sleep and then leaving her in her room for 10 minutes. Until this point, we have always made sure she is asleep when we put her in her bed (either by having been rocked or by falling asleep in the swing). Sadie spent the 10 minutes sort of fussing, but clearly attempting to get ready for sleeping. When the 10 minutes was up, I went into her room, stuck her pacifier back in her mouth, and sung to her a little bit. She was sound asleep within 5 minutes and stayed asleep until 7:30 am! We tried this again last night. It didn't work quite as well, but after giving Sadie about 1/2 of a bottle (I had already fed her for about 20 minutes less than an hour before this), she fell very soundly asleep and again slept until 7:30 am. I hate to listen to her cry, but I also know that is important that she begin to learn to self-soothe so that she is able to eventually get herself to sleep.

Now, for our interesting discovery. Up to this point, we have believed that Sadie most closely resembles me. While it is difficult to tell , for sure, who she will ultimately resemble, Adam stumbled upon a picture that has made us both think through things a bit more! Below is a picture of my mother-in-law, Adam's mom. 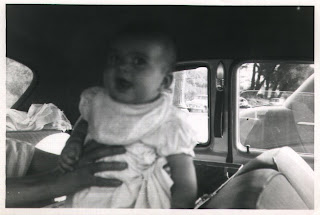 Doesn't she look familiar? For comparison's sake. Here's a picture of Sadie that I converted to black and white. 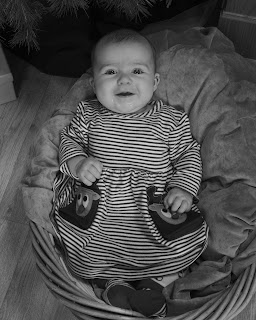 Pretty amazing, huh? I guess we'll just have to keep waiting to see who Sadie will ultimately resemble or if she'll end up being a pretty good mix of both of us. :)
Posted by Krysten at 10:14 AM

Very cute picture - isn't it funny when you discover something like that? Of course, no need to post any pictures comparing Hannah and Rob, you can already tell who she looks like. LOL

Sadie is getting to be such a big girl! Time just flies!

At Eric's Grandma's funeral, they were going through old photos. Eric's Dad picked up one and asked the aunts and my mother in law, who do you think this is: me, Eric, or Chris. No one could tell the difference. It was Dad! But Dad and Chris look eerily alike. Chris has Eric's facial structure and my nose, but Eric got his mom's nose, and oddly enough my nose looks more like Dad's. Sometimes it's very cool how they really look like you, so really have NO doubt they are your children.

Congrats on being 90% across the board! A healthy baby is indeed a wondrous blessing!

Speaking of huge blessings--Hooray for babies who sleep well! :)