Apparently August is the month for Crazy Animals! Last week I had to take Josey, our eldest cat, to the vet because he was straining to pee. We were quite worried because older male cats often develop bladder and/or kidney problems in their older age. However, this did not seem to be Josey's case. Josey has a VERY tiny bladder. In order to even see it, the vet had to hook him up to the ultrasound machine. This is actually a good thing because a smaller bladder means he is less likely to have problems, or so we've been told. However, the vet was unable to actually get Josey to pee, so this means that we're going to go ahead and treat a problem that we aren't quite sure exists. Josey has to have two antibiotic pills per day and three anti-inflammatory pills sprinkled over his food each day. Thankfully the anti-inflammatory pills can be consumed by the other cats because trying to separate food for the three of them is nearly impossible. Josey is not the ideal medicine taker so Adam and I must tag team him in order to get him to swallow his pills. We've only had one truly awful experience so far where more of the pill was dissolved on Adam's hand than was taken in by Josey and hopefully that won't be a repeated performance.

But, not wanting to be left out of the crazy animalness, Mortimer, my sister's dog, decided to do something REALLY stupid. Today is actually Mortimer's first birthday. So, he is really still a puppy. As a puppy, he likes to put just about anything and everything in his mouth and chew it to bits. Unfortunately, his "chewing to bits" did not work quite so well recently. On Wednesday afternoon James, my sister's boyfriend, returned home from work to find a rather large pile of doggy vomit. This is a bit unusual for Mortimer, so James was a bit concerned. Then, Mortimer got sick again while James was actually at home. This time the vomit actually contained blood. James was now officially worried and called my sister to inform her. Rhian has been working roadside in Camp Verde, Arizona during the week. Camp Verde is somewhere between an hour and a half and two hours away from Phoenix. Normally Rhian is picked up on Monday mornings by the work crew and is driven home on Thursday nights. However, Rhian was in town last weekend for the wedding of her college roommate and didn't get back to Phoenix until Monday night That meant she had driven herself up to Camp Verde on Tuesday morning. So, when James called on Wednesday afternoon, Rhian drove herself back down to Phoenix and met James and Mortimer at the emergency vet. The vet did an X-Ray and lots of blood work. They determined that Mortimer did not have Parvo, a fatal flu, and may have a blockage, but they couldn't tell from the X-Ray. When James had gotten home, Mortimer had managed to get into the 3rd roommate's room, Andrea, and chewed up a package of gum. This was a concern to the vet because gum can (and VERY often does) contain Xylitol. Xylitol is a sugar substitute that is safe for people but is almost instantly toxic for dogs. It basically shuts down a dog's liver. (SIDENOTE: If you are a dog owner and ever chew gum, PLEASE make sure you keep it away from your dog! I had never heard of Xylitol myself, but have now looked at several different kinds of gum and it's in ALL of them.) Mortimer's liver panels came back normal, though, so there was still no clear diagnosis. They ended up giving him a diagnosis of pancreatitis which is swelling of the pancreas. The vet gave him IV fluids, an anti-nausea medication, and an anti-inflammatory. They kept him over night and said they would do an ultrasound in the morning. So, on Thursday morning the vet did the ultrasound (yes - 2nd family pet to have an ultrasound in a week period!). The vet did see a rather large blockage this time and determined that the only way to remove it was through surgery. So, yesterday afternoon Mortimer underwent a pretty major surgery. He is a dachshund, so he was a long torso. He has a cut from his rib cage to his private parts where they had to cut him to get to the blockage. When they got there, they discovered that he had bitten off the foot of one of his favorite toys and then swallowed the foot. CRAZY, right? I'm posting two pictures below. The first is of the chewed off foot and the second is of my sister and Mortimer right after he came out of recovery. 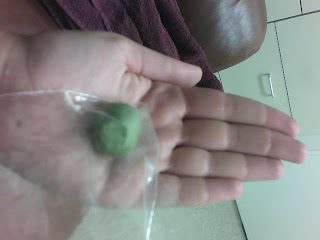 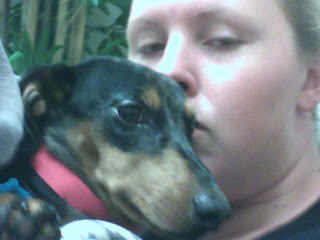 Mortimer has a long recovery in front of him, but he should be doing well and back to normal within a month's time. Hopefully he has learned his lesson. I know this is not the way that anyone thought he would be spending his first birthday!

So, two crazy animal stories and you think I'd be done, right? Nope. My parents did not want to feel left out. When my mom went out of the house on Wednesday morning, she was hoping to go to a workshop. Instead, she was greeted by a sick raccoon who refused to move out of the middle of the driveway. My parents immediately called the Ohio Wildlife Center, which is actually located at the back of our vet's office, to see what they could or should do. The Wildlife center said that the raccoon likely had distemper and would not survive but my parents were welcome to bring it in. The Wildlife center doesn't do any kind of pick-up, so my dad spent the morning trying to find some place that would come and get the raccoon. This was not successful. Worthington no longer has an animal control section of their police force and everywhere else he called either wanted to charge them an arm and a leg or would kill the raccoon in order to trap it. So, my dad finally found a cardboard box and using a broom, coaxed the raccoon into the box. He then taped the box shut and drove the raccoon over to the Ohio Wildlife Center. We won't actually find out what happened to the raccoon, but since my dad saved it from death in their driveway, he should have brought about some good animal karma, right?

To wrap things up on a happy note, I would like to throw out belated birthday wishes to my husband! Adam's 32nd birthday was on Wednesday. He did have to work, but he got to have Grinder's for lunch (with me) and then dinner with me at On the Border and we watched "Pineapple Express" at the movie theater. All in all it was a pretty good birthday! And, as my Dad pointed out, we can now claim that Adam and i were 60 (our combined ages) when Sadie was (is) born! ;)

Well, hopefully all of you animal lovers out there do not have similar crazy animal stories to share and are instead preparing for fulfilling, fun, and relaxing weekends. Hopefully we are headed down that same path! Take care! :)
Posted by Krysten at 11:55 AM

My brother's stupid dog is notorious for eating things he shouldn't (mainly sock). Apparently, earlier this month, he ate some of my brother's underwear and had to have surgery to remove them. Dumb, dumb, dog!

Mortimer certainly is a cutie! The cute ones are always trouble. When Fina was younger, we were worried that the dog ate the plug off the alarm clock, took her in for x-rays, and nothing. Weeks later we found it tucked down inside where the sheets go under the bed. She's been blessed to have eaten tons of chocolate, regular and sugar-free, literally a couple pounds of homemade play doh, and also has an affinity for aveda and bath & body works chapsticks, but nothing has happened. Boxer has a stomach of steel!

Giving pills to cats is awful--hang in there!

amen to awful pill giving. When Kitty Finn had her ACL fixed, I had to have my mom come stay with us. We were on a 4 hr rotation of various meds and it took at least two people to administer them. No onw slept in like two weeks. I guess it was good prep for the baby.