Today is February 16. Sadie is five months and 12 days old. She weighs over 18 lbs now. I'm not sure how long she is, but she's definitely gone through another growth spurt again recently. She now can easily reach the ground when she's in her Jump-a-roo and also when she's in her exosaucer. Also, when you put her in the swing, her feet hang out over the end and they're starting to do the same in her car seat! We have bought two new big girl seats for Sadie. We haven't put them in the car yet, because I keep hoping to not have to until the weather gets a little warmer. However, Sadie may be too long before the weather consistently warms up. I guess we'll just have to see.

For the last several weeks Sadie has been wearing 6-9 month clothes. She's now (starting last night) just wearing some full out 9 month clothes. These clothes seem to be plenty big around the belly, but none too long! I guess Sadie's trying to keep up with Parker!

Today Sadie has developed a bit of a cough. I'm a little worried. But, she doesn't have a temperature and she seems to be breathing just fine. I guess it's just something to keep an eye on. She also doesn't seem to have any other symptoms, so hopefully it's something that will just go away.

Sadie has continued to roll over and is now rolling in both directions. No one has actually seen her roll from front to back, but we'll leave her on her tummy, go run around to do something, and when we come back she's on her back. So, she can obviously do it, she just doesn't want an audience. Sadie is also trying desperately to be able to sit up on her own. She's very successful for about 10-15 seconds. If she falls straight forward she can get herself back up. But, she often falls to the side or to the back. When that happens, she's stuck and gets VERY angry.

Much to my dissappointment, Sadie has started receiving some formula to supplement the breast milk that she's still getting. For some reason, despite my MANY efforts (including taking a drug that nearly blinded me!), my body has stopped producing enough milk for Sadie to subsist on it alone. So, about 1/4 of every bottle ends up being formula. :( She doesn't really seem to mind, but it's really not what I wanted for her.

Other recent happenings - Sadie has discovered her feet and after several weeks of working at it can sometimes squish her chubby belly down enough to get her feet to her mouth. :) Sadie also has discovered new foods - oatmeal, prunes, peas, sweet potatoes, avocado, bananas, rice cereal, and she has even sampled a little ice cream and a little pizza crust. The last two were in EXTREMELY small portions since I know very well she could have strong allergic reactions to any of the ingredients in them and we wouldn't know what specifically she was allergic to. Thankfully, she didn't seem to have any bad reaction. In fact, the only thing that seems to have caused a negative reaction is the avocados. Sadie loved eating them, but they seem to have caused her to have some constipation. She's been able to squeeze some stuff out, but it's coming out pretty hard, which it really should not be at this point. This is why Sadie has been eating prunes. We're still waiting for the prunes to really take effect. Hopefully the reaction won't be too awful!

Finally, here are some recent pictures of Sadie. These were taken by the guidance counselor at my school. Sadie came out for a visit last Thursday night (February 12). It was conference night. I had to pick her up from the sitter's and then Grandma came and picked her up from me. Check out her little Valentine's Day dress! So cute! 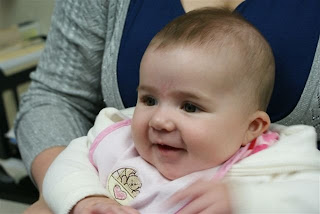 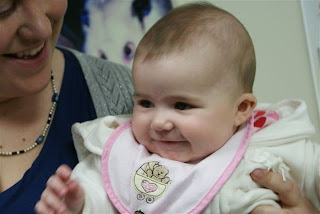 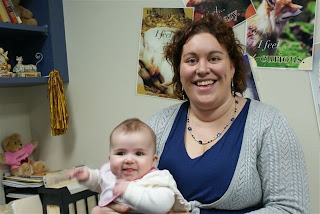 A. I know it's crappy having to "spike" your milk. We had to too, when Chris wouldn't grow. Someone once said that they don't ask on a college application if you were breast or bottle fed. And giving her the GOOD Stuff for nearly 6 months is pretty good, so fret not.
B. Vicks Vapor Rub makes a Baby Rub (with a pink lid) that has a heavier vaseline base, and isn't quite as strong as regular Vapo-Rub, but it is a Godsend for the snoochies and coughs. Also Johnson's makes a really great baby friendly Vapor Bath that helps too! Hope everyone stays healthy!

I second the vapor bath for the sniffles/cold. It always helps my girls out. In fact, we're doing one tonight!

As for the constipation, try pears or some pear juice. It works better than prunes (less cramping in the belly).

And don't feel bad about supplementing. Lydia only got breastmilk for 4 weeks before her allergies required hypoallergenic formula and at 6 months with Miriam my milk completely dried up.

What a cutie! And don't worry about "spiking;" just realize that nearly 20 pounds of baby is an awful lot to be subsisting solely on something that comes out of your body!