Well, the last post's title was a lie. September 3, 2008 is NOT Sadie's birthday. She was a long time in coming and did not arrive until 7:50 am on Thursday September 4, 2008. I did arrive at the hospital at 7:00 am on Wednesday for the induction. But, we had a bit of a problem from the get-go. I have very deep veins in my wrists and the first time that they stuck me to try to get my IV going, things did not go well. The nurse kept digging around and trying to find something, but the only thing she found, in my opinion, was lots of pain for me. So, another nurse came and stuck me on my other hand. Basically, the day did not start off that well for me.

By 9:00 am, they finally had started me on the pitocin and things began to move along. I also had a follet (sp?) that was basically inserted into me to get my body to dilate with the need for prostaglandins. The follet was supposed to get my body to start making its own prostaglandins. Anyways, the follet usually takes 4-6 hours to fall out. Mine came out within 2 hours, but at the end I was only a little over 2 cm dilated and still not effacing much faster with the pitocin. So, they upped my pitocin. By 3:00 pm, I was up to 4 cm dilated, but they had to have a resident come to break my water and all of the on-call residents were working on C-sections. It was after 5:00 pm before they finally came to break my water. I had heard that this was not an altogether great feeling, but I actually didn't think it was that bad. I was more disturbed by the fact that the doctor got my socks all wet with amniotic fluid and then took them off of me. I didn' t have another pair of socks with me that I wanted to put on, so I was just more irritated than anything.

Unfortunately, breaking my water did little to get my dilated or effaced much faster. So, I did end up asking for an epidural when I was not much past 4 cm. I decided that it was silly to be in pain, particularly knowing that if it took as long to get anesthesia there as it did to get the residents to break my water, I probably wanted to get moving. Anesthesia actually got there really quickly and I had just had some nubain right before they put in the epidural. This was great because the nubain completely calmed me down. They went over with my all of the risks and such for epidurals, including that it's possible, though, rare that the first epidural will not take. Again, remember that September 3 was not my lucky day. :) The epidural did not take. It made me very itchy, but that was about it. So, about an hour to an hour and a half after the first epidural, anesthesia came back, removed epidural number one and started epidural number two. Epidural number two was great. It had me numb up to right underneath my breasts and down to right above my ankles. I could still feel pressure, but much less pain.

Many, many, many more hours went by and around 6:00 am, my nurse told me that my doctor had called and that if I did not make some serious progress fast, that she would be taking me to have a c-section for lack of progress. By this point I was 100% effaced and a little bit more than 9 cm dilated. And, I was darned sure not going to have a C-Section after all that I had already been through. So, my great and wonderful nurse got me into this position where I boosted by butt up into the air and did some pelvic thrusting. Then I laid on my side with my bottom leg straight and my top leg up like a flamingo. The nurse kept coming back and checking me. No progress after the butt in the air position. I started crying and basically mentally yelling at Sadie to please get moving. She FINALLY listened! When the nurse checked me one last time, I had come down to zero station and was fully dilated and effaced. Yeah! She called my doctor immediately and said we could begin to push with the next contraction. My doctor lives about 20 minutes away. My goal was to push for as short a time as possible. After all, we were nearing 22 hours of this actual laboring process by now and I was ready to go. I was completly out of epidural medication by this point, but I figured that it wasn't really going to make much difference at that point anyways. I was going to feel pain and I was going to have to deal with it. I just wanted this all over with and done! Within 3 cyles of pushing, you could see Sadie's head. The nurses actually made me slow down and do half-cycles because my doctor wasn't there yet. This, of course, irritated me further. Half-way through my second set of half-pushing, my doctor arrived and I finished the set pushing for the full 10 seconds. Within 4 more push cycles, Sadie was out! Her head was 15 cm in diameter. She weighed 9 lbs 1 oz (11 oz less than myself and my crazy mother didn't have an epidural!) and 20.5 inches long. Her first APGAR score was an 8 and the second was a 9. She has lots of REALLY dark hair. She has very chubby cheeks and is quite the beautiful little girl, if I do say so myself.

I did require about a half-hour of stitching up, but my mom tells me that the whole process took as long as it did because my doctor was very careful in her stitching and I should actually be pleased with this because there's much less chance of an infection with the thorough job she did.

As soon as possible, I got some breakfast in me and immediately started feeling better. Life was good! Here are a few pictures of Sadie: 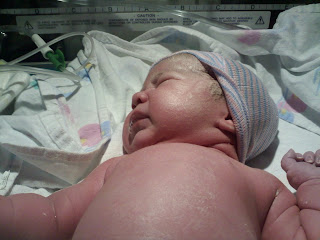 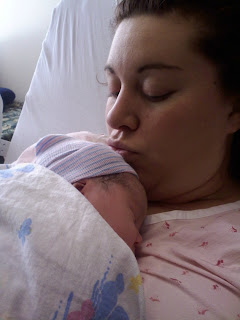 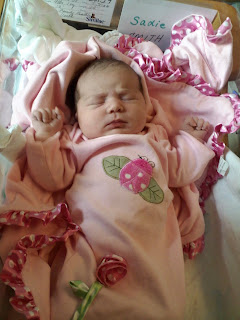 The first two were taken yesterday shortly after she was born. The last one was taken this morning after she had had her professional picture taken here at the hospital.

You will be able to view more pictures of Sadie at the hospital's website. I can't give you a link yet, because I don't have it myself. But, I can tell you to go to Google and type in "Ohio Health". It will be the first web page to come up. Next click on Riverside Hospital. Then on the left side will be a link for the Peakaboo Nursery. Click on that link. Then you'll need to change the date so that it reads September 4, 2008. Then Sadie's name will come up as "Sadie S". Click on that and you'll be able to view the professional pictures.

Well, it's taken me nearly 2 hours to write this because of all of the people that have come in and out of the room in that time. So, I'm going to go and start filling out some of the millions of forms that are requried for us to go home tomorrow. Please send your glowing comments! :)
Posted by Krysten at 2:12 PM

Wow, what a trooper! Even if it wasn't the best experience ever, I'm glad that you were able to have her without a c-section, just like you wanted.

She is beautiful - congrats and welcome to parenthood!

Congratulations!!! She's beautiful, and so healthy looking. Way to go!

Krysti, Sadie is so beautiful! And you sound like such a happy mommy :) I showed Jamie her picture and told him he would get to meet her soon. Let me know when ou feel up to having a chat and I'll give you a call.

Woot, Woot! Congrats! She's beautiful. Thought I think the color pink threw up on her - you might want to get the checked out. :)

She's adorable!! I'm glad the delivery worked out well for you in the end!