Many, Many Glorious Pictures

Ok - so I've promised some pictures for quite a long time and I've FINALLY been able to get them onto my computer so that I can get them to you! This first picture was taken way back in October when Aunt Rhian came to visit. This was the first time both she and Mortimer got to meet Sadie. Here's the adorable shot: 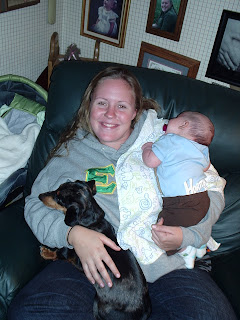 Next is a shot of Sadie and her friend Parker. This was also taken in October. We drove over to Indianapolis for Butler's homecoming. I can't wait to take a similar shot of both girls next year to see how much they've grown and changed! I know it will be astonishing! 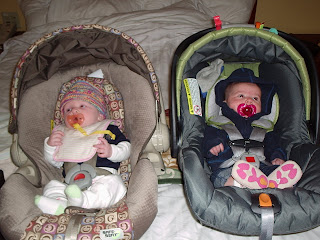 Next is a Thanksgiving shot. It's not the greatest, but you can kind of see Sadie's cute little Thanksgiving outfit. 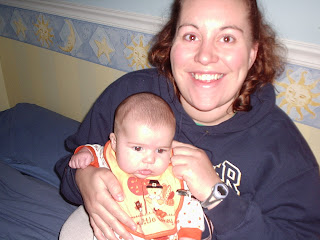 Now we have a shot that I just can't resist. Sadie has recently begun to actually enjoy being on her tummy for longer periods of time. She's almost rolled over a number of times and if she's on any kind of an incline she will actually roll over. She's a genius, I know! :) 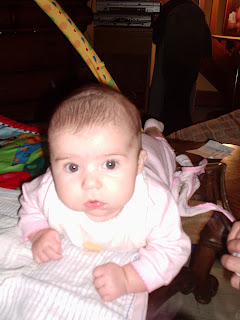 The next two shots are also some favorites. There is one of me and Sadie and you can kind of see our Christmas tree in the background. I was dressed up and ready to go to the Orange Johnson House. This is a historical house in Worthington. The Worthington Historical Society gives tours of the house every Sunday. The house was built by Mr. Buttles sometime in the very early 1800s and has been in Worthington ever since. Obviously, Orange Johnson and his family lived in the house for a long time, which is why it is now named after him. Anyways, for the last 28 years there have been special Saturdays in December for children in 3rd and 4th grades (the years you study Worthington history in school) where children can pay a small fee and come to the Orange Johnson house and celebrate a 19th century style Christmas. They get to enjoy a meal that they help prepare. The meal is all cooked over the open fireplace. (My mom's the one who does ALL of the cooking over the fireplace - very HOT work!) They make a craft, sing some carols, play 19th century games, listen to stories, and get a visit from Saint Nicholas. This has all led up to the explanation of the other picture. This is Sadie and Saint Nicholas. If you look closely enough you might recognize Saint Nick (hint: at least thus far, Sadie has avoided inheriting his nose!). 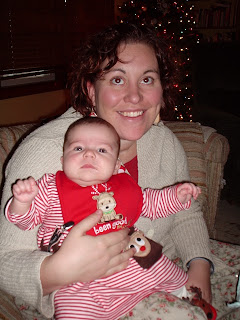 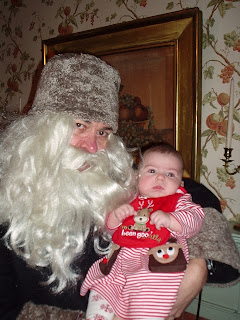 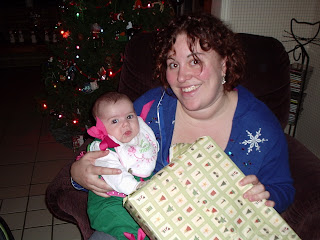 Then, there's a shot of my Dad's favorite gift that he purchased for Sadie. It's a Po-knee (pony). It actually makes horsey noises and both Grandpa and Sadie seem to love it. I will do my best to actually get the video posted. It's very funny! 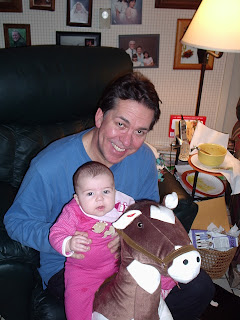 Finally, here's a family shot at the Columbus Zoo. Earlier this week we had an unseasonably warm day - 66 - so we took advantage and took Sadie to the zoo to see the Wildlights. She was captivated, but, as you can see, all that looking around was tiring work! 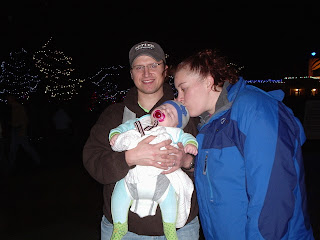 Holy cow - I almost forgot one! Here is Sadie with Santa! 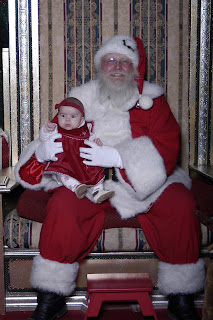 Well, hope everyone had fantastic Christmas celebrations and are anxiously awaiting your New Year's celebrations. I'm definitely looking forward to 2009 and all of the wonderful things that are in store for us. Hopefully there will be as many wonderful blessings in our lives in 2009 as there have been in 2008. We began this last year by learning that we were pregnant with Sadie and this year we begin by celebrating with her! Adam, Sadie, and I all wish you much joy and happiness in the year ahead!
Posted by Krysten at 8:27 AM

Shay got a rocking horse from Ben's parents that appears to be very similar. They can have races when they get a little older. :)