This morning was our last scheduled peek at our little bundle of joy before she makes her "real" debut in the world. As you may have guessed from the title of the post, we have decided to name her Sadie. We have a middle name that we like, too, but we haven't decided how to spell it yet, so you'll just have to wait a few more weeks to learn her middle name!

We have a couple of 3-D images and I think this one is the best. Sadie kept holding her hands over her face, so even when she didn't have a hand directly on her face, the ultrasound kept picking up the shadow. This is why it appears she has a hole in her head. She does not have a hole. :) 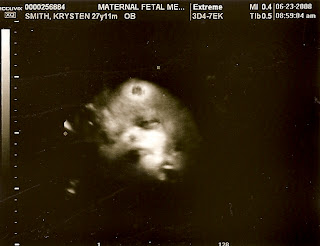 We did learn that Sadie, not surprisingly, has some rather large feet. Check them out! She also has some pretty long legs! 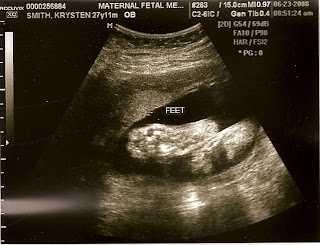 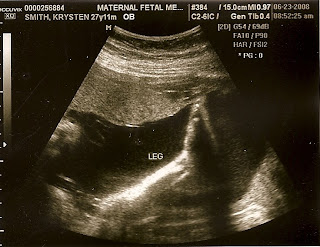 Sadie is measuring in at 4 lbs and 2 oz right now. The ultrasound technician said to expect her to gain half a pound every week until she is born (in 10 weeks). This means that she will likely weigh in at around 9 lbs. Her momma was 9 lbs 12 oz, so Sadie being big is no surprise!

Sadie is currently in a breech position and loves to kick mommy right in the bladder. Also, because she was breech and not overly cooperative, the technician wasn't able to get the greatest profile shot. It somewhat appears she has a GIANT bulbous nose. It's actually her hand again and not her nose. The top of her head is at the left of the picture and you can see her knees curled up at the right of the picture. 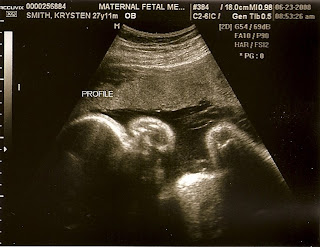 We learned that Sadie is in the 75th percentile for weight and length right now and that doesn't seem to have anyone worried because she is neither too small nor too big. And, because she has been growing so much, the fibroid has not been growing! It was exactly the same size as before! Yeah! This is very good news because it shouldn't interfere with delivery at all. :)

Finally, my mom and I worked on a few more updates to Sadie's room, so I wanted to share those too. Please see below! 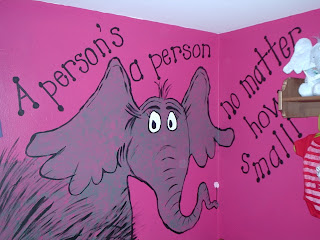 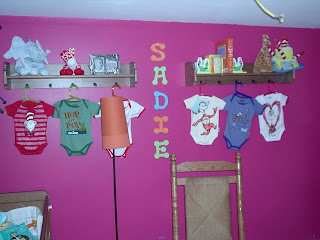 Well, after a less than restful night last night, this momma is ready for a nap! Hope you're all having a great Monday!
Posted by Krysten at 1:49 PM

Wow that 3-D ultrasound is amazing!!! Sounds like she is growing like a champ! Oh and don't worry too much about her being 9lbs - those u/s are pretty much always wrong. ;)

Your nursery looks AMAZING!! How fortunate you are to have someone so talented in your family!

Hey way to make us feel bad by having such a rocking nursery already. At least we have the crib up...now if only we had a mattress!